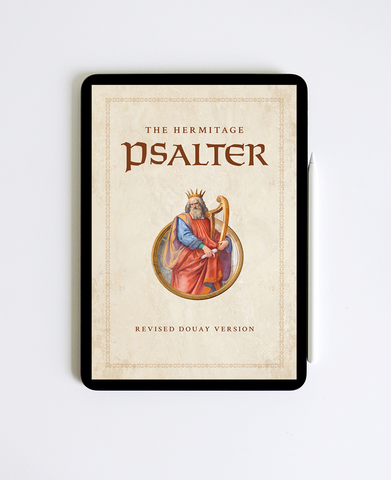 Gregory Martin (1540–1582) was an Oxford scholar of Hebrew and Greek, one of the original dons of St. John’s College. He helped bring his fellow don St. Edmund Campion into the Church and later was tutor to St. Philip Howard.

Fleeing from Queen Elizabeth I’s persecution in 1570, he entered William Cardinal Allen’s College at Douay and was ordained at Brussels in 1575. He then served the cardinal in various capacities, including as translator of the Latin Vulgate Bible into English. Although assisted by Allen himself and some fellow Oxonian exiles, he was crushed by the work and died of consumption as his New Testament was coming off the press at Rheims. The Old Testament printing at Douay could not be financed until 1609–1610, a year before the King James Version appeared.

The present revision of his Psalms and Gospel Canticles strives to conserve his solemn and poetic English, as well as his fidelity to the literal sense. The Psalter is the fundamental liturgical prayer book for both Jews and Christians. Monastic tradition, as expressed in St. Benedict’s Rule, recommends the communal chanting of all 150 Psalms weekly.

Since the Church today calls for Bible translations from the original languages, years of effort, using a multitude of sources, have gone into adjusting to the Hebrew and Greek. To paraphrase St. Paul (Galatians 2:5 and 2 Thessalonians 3:13): We did not yield for a moment to weariness in welldoing, so that the truth of the gospel (as embedded in the Psalms and Canticles) might abide for your sake.